Schizosaccharomyces pombe vesicle trafficking: role of the exomer and other adaptors
in morphogenesis and in the response to stress

Schizosaccharomyces pombe is distantly related to Saccharomyces cerevisiae. This fission yeast is a well-established alternative laboratory model because some aspects of its cell biology are more similar to those in higher organisms than to those in budding yeast. We use S. pombe as a model to advance our understanding of the mechanisms that regulate vesicular traffic.

Our general objective is to advance the knowledge of the role of vesicle coats and adaptors in vesicle trafficking, and in the regulation of physiology and morphogenesis. Our studies have allowed knowing that one of the fundamental roles of clathrin is to regulate the synthesis of the cell wall, the fungal equivalent to the extracellular matrix (de Leon et al., 2013). We have also found out that the AP-2 complex is necessary to guarantee the proper dynamics of the endocytic vesicles, and that it participates in the establishment / maintenance of cell polarity (de Leon et al., 2016, de Leon & Valdivieso, 2016). The study of the relationship between different clathrin adaptors that operate in the Golgi and endosomes led us to discover that the collaboration between GGA adaptors and the Epsin Ent3 is essential for vesicular trafficking and for the maintenance of endosomal integrity (Yanguas et al., 2019). Additionally, the study of the recycling of the SNARE Stx8 led us to conclude that the retromer sorting motif has undergone evolutionary divergence, something that had not been described for cargo-sorting motifs recognized by other adaptors (Yanguas and Valdivieso, 2021). Exomer is a fungal protein complex, first described in S. cerevisiae as an essential regulator of chitin synthesis, which has characteristics of both coats and adaptors. S. pombe bears the simplest functional exomer. Unlike S. cerevisiae, S. pombe does not have chitin and its exomer does not have a role as a dedicated cargo adaptor; instead, it plays a still-unknown general role in vesicle trafficking that is required for the maintenance of the Golgi and endosome integrity. Moreover, exomer collaborates with clathrin adaptors (AP-1 and GGAs) in vesicle trafficking between endosomes, so that its absence alters several traffic routes (Hoya et al., 2017). In addition, exomer mutants are sensitive to ionic stress, but not to osmotic or oxidative stress. Our initial studies suggest that exomer acts as / collaborates with a hub for various stress response pathways. We are studying the role of exomer and other adapters in the connection between vesicular trafficking, response to ionic stress, and morphogenesis. 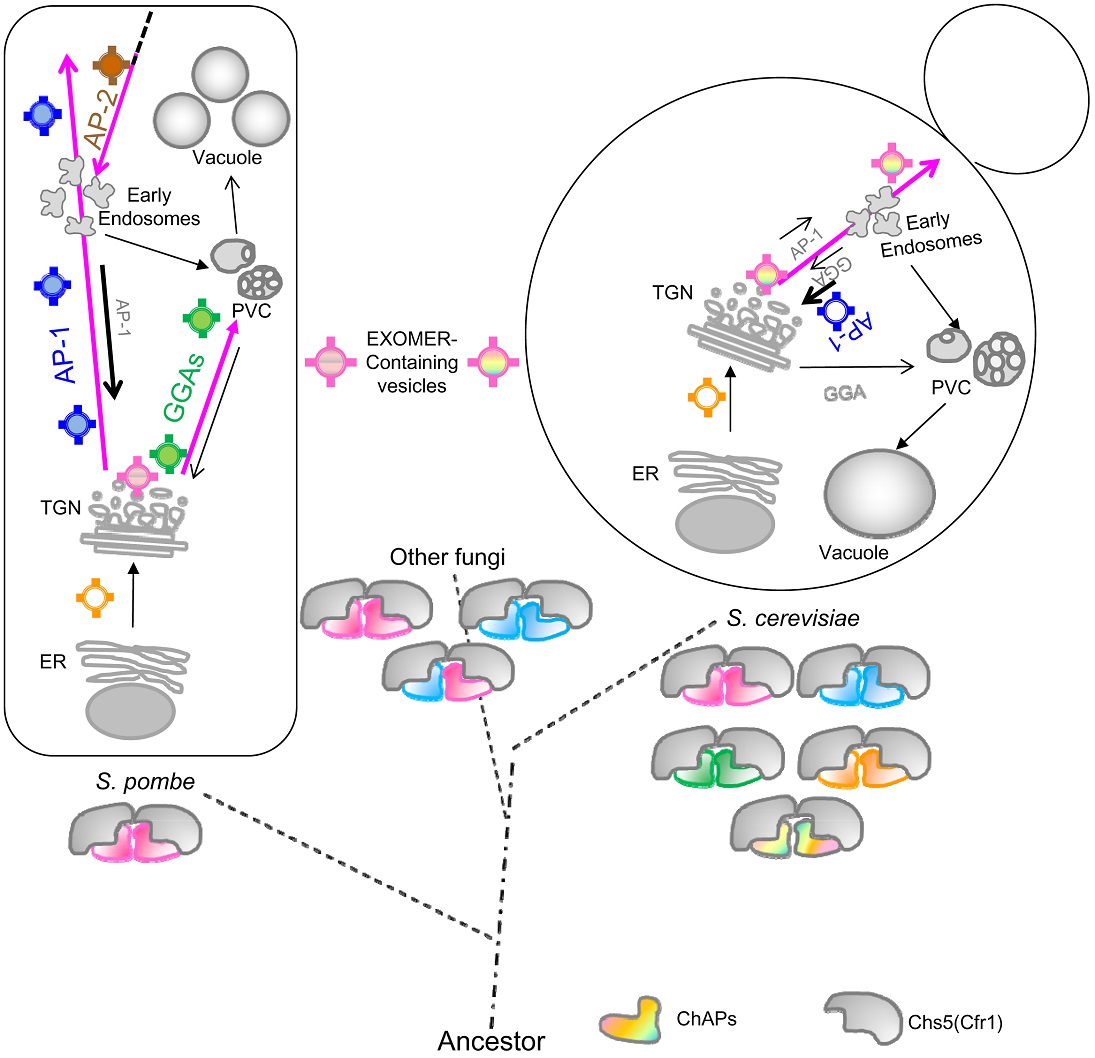 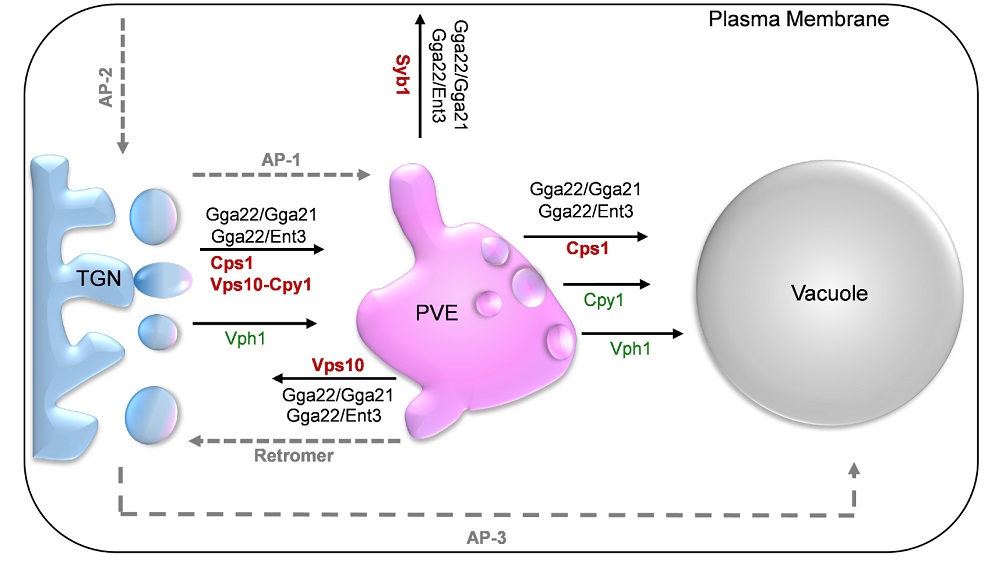 Figure 2. Role of clathrin adaptors in vesicle trafficking between early and late endosomes. Red lettering denotes the cargoes whose traffic is altered by mutating the adaptors indicated next to the arrows, which signals the direction of the traffic (Yanguas et al., Scientific Reports, 2019). 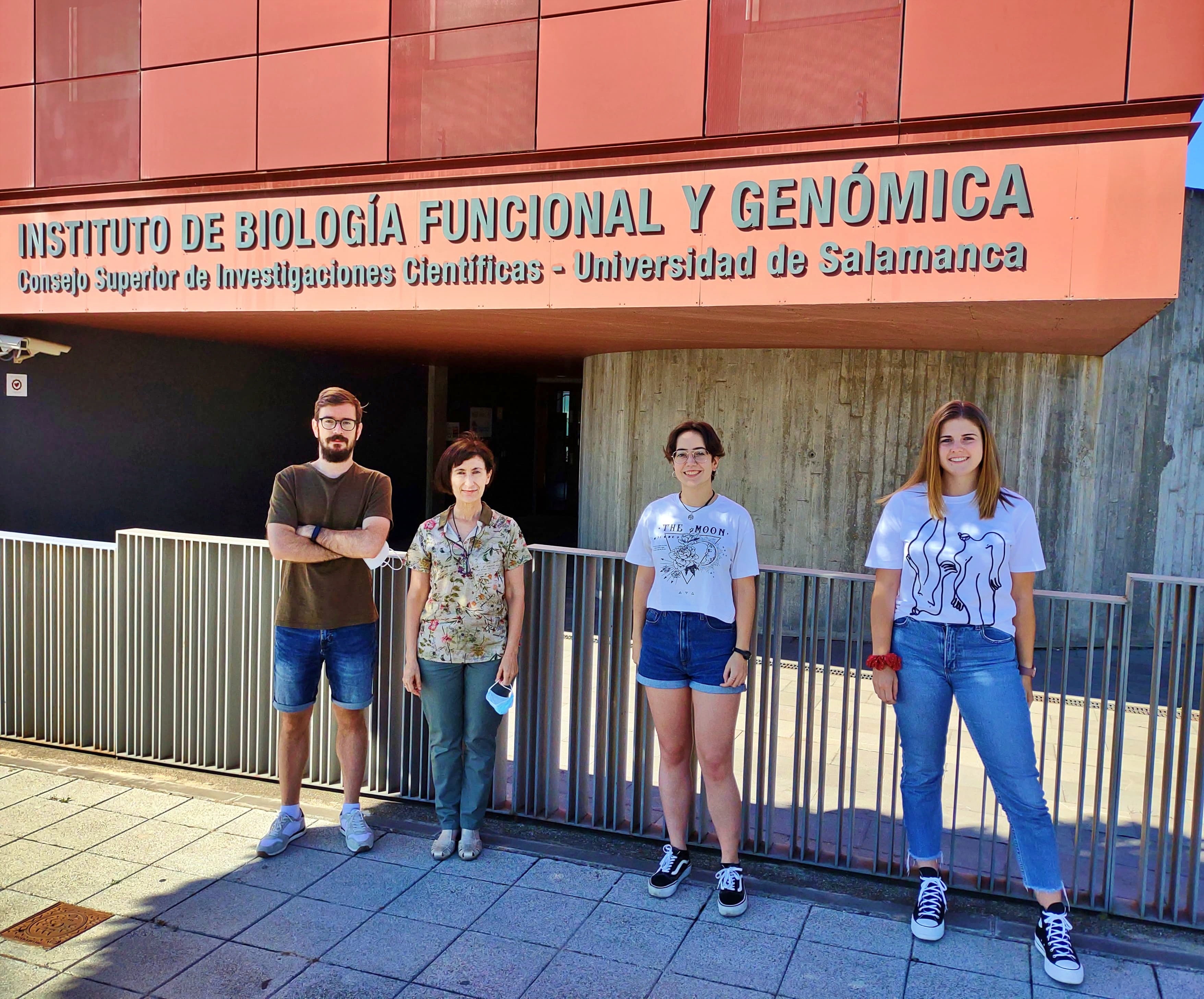