Candida albicans is the main commensal fungus of the membranes of the gastrointestinal and genitourinary human tracts. However, this commensal behaviour can become pathogenic when intestinal dysbiosis or immunosuppression occurs. Ironically, the number of individuals vulnerable to C. albicans infections has recently increased due to antibiotic treatments, cancer chemotherapy, or organ transplantation. The most serious infections occur when C. albicans enters the bloodstream, giving rise to a systemic infection with a high mortality rate.

C. albicans can adopt different morphologies depending on the environmental cues present in the host (Fig. 1). Under normal conditions, the typical morphology is the yeast form, characterized by round or oval cells that separate after mitosis. Environmental cues that reflect host conditions (37°C, neutral or alkaline pH, or presence of serum) induce the transition from yeast to hyphae. Hyphae are unbranched tubular multicellular structures in which cells remain attached after mitosis. Hyphal development is necessary to evade phagocytes, escape blood vessels, and colonize medical devices through biofilm formation, while yeast forms facilitate dissemination through the bloodstream.

NDR kinases are a highly evolutionarily conserved family of protein kinases in eukaryotic cells that regulate essential cellular processes. In S. cerevisiae, Cbk1 is an NDR kinase with an important role in the regulation of morphogenesis and the generation of asymmetry during cell division. Cbk1 is the final effector of the RAM pathway (R egulation of Ace2 and polarized Morphogenesis), involved in the regulation of mother-daughter cell separation, in the induction of daughter cell specific genes and in the maintenance of cell wall integrity. The pathway is composed by the Cbk1, Mob2, Kic1, Hym1, Tao3 and Sog2 proteins, which localize to growth areas. The RAM pathway is similar to the Drosophila Hippo pathway, involved in the control of cell proliferation.

In C. albicans, the RAM pathway is essential for polarized growth, since mutants lacking any of the component of this network have defects in cell polarity, cell separation, and are unable to form filaments. Cbk1 also regulates the asymmetric accumulation of the Ace2 transcription factor at the nucleus of daughter cells by phosphorylating a nuclear export sequence. The RAM pathway is also involved in morphogenesis and polarized growth, as cbk1Δ mutants are rounder than wild-type cells. Furthermore, mutants lacking Cbk1 are unable to generate hyphae. This is due to the fact that Cbk1 plays an essential role in the initiation of filamentation by regulating the mRNA-binding protein Ssd1 (Fig. 1). Using a cbk1-as conditional mutant that is sensitive to the 1NM-PP1 analog, it has been possible to study the role of Cbk1 in maintaining polarized growth, a phase that occurs after the assembly of the first septin ring.

In our research group we are interested in studying the regulation of polarized growth by the Cbk1 kinase, as well as in the mechanisms necessary to generate the asymmetry between the apical and subapical compartments during hyphal growth. The Cbk1 kinase localized in a highly polarized manner to the hyphal apex (Fig. 2), which suggests that this polarization could generate a signalling gradient of kinase activity that extends along the germ tube from the tip to the basal body. This gradient could be controlling the polarisome and other machinery involved in polarized growth at the apical compartment. Cell division during hyphal growth is an asymmetric process that generates two genetically identical nuclei, but with different properties since only the apical cell continues to grow in a polarized way to extend the filament while the subapical cell(s) arrest in G1. The gradient of activity Cbk1 from the tip could also contribute to generate nuclear asymmetry by controlling the localization of important transcriptional regulators (such as the Nrg1 repressor and/or the Ace2transcription factor) between the apical and subapical nuclei during mitosis.

Figure 1. C. albicans has great phenotypic plasticity and can reversibly change its morphology from yeast to hyphae, which facilitates host infection. The NDR kinase Cbk1 together with its coactivator protein Mob2 are essential for the initiation of filamentation by regulating Ssd1, an mRNA-binding protein. At the same time, its kinase activity is essential during for the maintenance of polarized growth that occurs after septin ring assembly.

Figure 2. Cell division in Candida is asymmetric and generates two cells with different behaviour. In yeast, the Ace2 transcription factor accumulates in the apical nucleus (daughter cell) by a mechanism that depends on its phosphorylation by Cbk1. During filamentation, mitosis is also asymmetric and generates two nuclei with different fate: the subapical cell is arrested in G1 while the apical cell continues to grow in a hyperpolarized manner and progress throughout the cell cycle. Cbk1 (in green) localization is highly polarized to the apical cell cortex (in red, the Sur7 protein that localizes to the basal body), and this localization could generate a gradient of kinase activity that is responsible for polarized growth in the apical compartment and, at the same time, contribute to the asymmetric distribution of important regulators. Some, such as the Ace2 transcription factor, accumulate in the apical nucleus, while others, such as the Nrg1 repressor, accumulate in the subapical nuclei, and this causes hyphal-specific genes (HSGs) to be expressed mainly in the apical compartment. 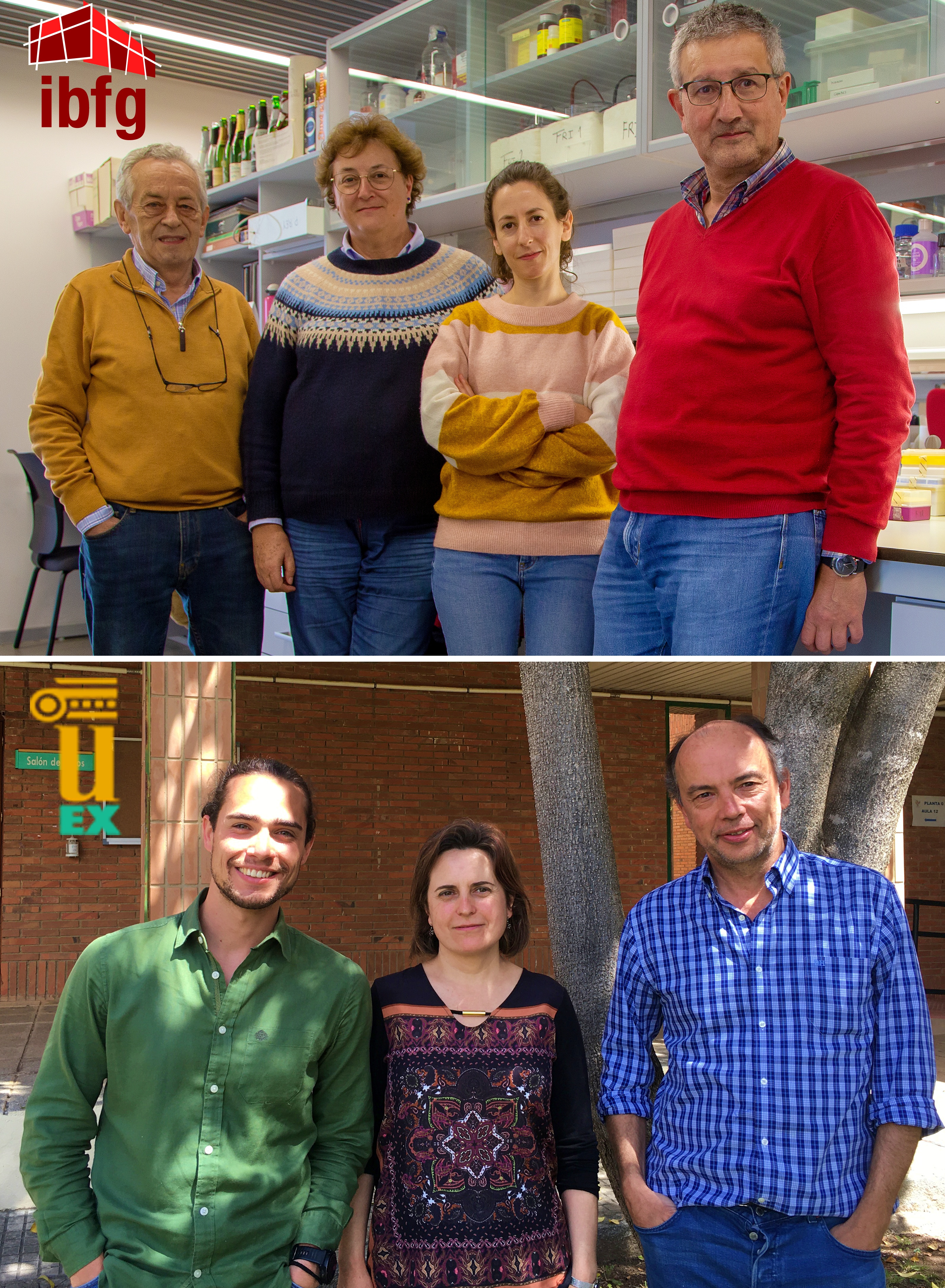 Group members at the IBFG

Group members at the UEx