The way the cells generate their polarized growth and division is of fundamental importance to understand the cell morphogenesis process. The maintenance of the cell shape requires the correct establishment of the polarized growth and division sites and the polarized delivery to specific sites of the cell growth components. In the case of fungi, the cells grow by addition of new material to both their plasma membrane and cell wall (functional equivalent of the extracellular matrix of animal cells). The cell wall is a structure external to the plasma membrane that is present in all fungal cells; its integrity is crucial for the cell and it constitutes the exoskeleton that confers mechanical strength and osmotic resistance to the fungal cells.

The fission yeast Schizosaccharomyces pombe provides an appealing model for studies addressing cell wall synthesis and morphogenesis. Fission yeast cells are rod-shaped and grow in a polarized manner at the cell ends. Cytokinesis is the final step of the cell cycle and it is conserved in all the organisms. It is a spatially and temporally regulated process that establishes a physical barrier that divides the cytoplasm between the two daughter cells. Cytokinesis requires coordinated closure of a contractile actomyosin ring and synthesis of plasma membrane. In fungal cells cytokinesis requires concomitant synthesis of a special wall named division septum.

We are interested in the functional characterization of the proteins involved in the synthesis of the structural polymers of the fungal cell wall, specifically the β(1,3) and α(1,3)-glucan. The fission yeast contains four essential Bgs1-4 proteins, which form part of a highly conserved family of β(1,3)-glucan synthases of fungi and plants. In addition, the α(1,3)-glucan synthase Ags1 is also essential and well conserved in fungi.

As the cell wall biosynthesis is coupled to other cellular processes, we are interested in defining the differential roles of Ags1 and Bgs proteins in morphogenesis processes as important as cytokinesis, polarity and cell integrity. Although cytokinesis is a well-studied process, little is known about the septation process. Our studies have started to reveal the essential and specific role of each Ags / Bgs protein in cytokinesis. For example, the β(1,3)-glucan is not only important for the septum structure but also to connect the cell wall with the plasma membrane and for contractile ring function.

Invasive fungal infections have dramatically increased over the past decades with the rise in at-risk populations of patients. In mammalian cells, the cell wall is absent and consequently drugs that interfere with its synthesis are attractive as potential antifungal agents. Recently, a new family of specific β(1,3)-glucan synthesis inhibitors has emerged as an alternative antifungal therapy and is gaining increasing relevance yearly. In this sense, we intend to gain a deeper knowledge of the mechanism of action of the β(1,3)-glucan synthesis inhibitors, as well as the mechanism of resistance that may be generated in the cells. 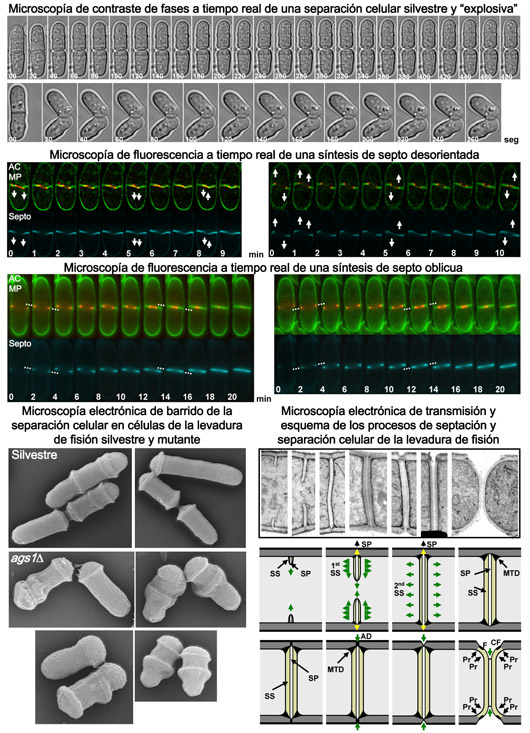