Regulation of zinc homeostasis and virulence in animal fungal pathogens

The tissues and organs of animal organisms are very hostile environments that cannot be invaded by non-pathogenic microorganisms because, unlike pathogenic microorganisms, they are not well adapted neither to obtain essential nutrients from the host nor to evade or counteract the innate immune response elicited by the host. The bioavailability of essential metals (e.g. zinc) in living tissues is extremely low since more than 99.999% of Zn2+ cations are tightly bound to different classes of animal proteins. In addition, Aspergillus fumigatus (Fig. 1), which is the microorganism used as a model for filamentous fungal pathogens in our laboratory, is enabled to counteract the nutritional immunity displayed by the host due to its high capacity to subtract Zn2+ ions from host tissues. Actually, this is one of the major reasons that allows this filamentous fungus to grow in the pulmonary airways of susceptible individuals and to invade the lung parenchyma and to cause an infectious disease known as Invasive Pulmonary Aspergillosis (IPA) (Fig. 2). Moreover, Aspergillus fumigatus is able to invade the blood vessels and to disseminate through the bloodstream (Fig. 3), which allows it to reach and preferably settle in those organs with the highest zinc content such as the brain and heart. To this stage of the disease is known as Disseminated Aspergillosis (DA). It has been estimated that about 5-30% of immunosuppressed individuals are at risk of suffering IPA/DA, whereas the mortality rate is about 50-95% even after having received a proper antifungal treatment.

The research conducted in our group is focused to understand, at a molecular level, the regulatory mechanism of zinc homeostasis in Aspergillus fumigatus (Fig. 4), and how this regulation is influenced and/or modulated by other nutrients or environmental factors. Our final aim is to make use of such knowledge to design a new therapeutic strategy to control fungal growth in patients in a much faster and efficient way than that attained with the current treatment. In this regard, several experiments that we have carried out in collaboration with other investigators have provided a proof of concept that strongly support our notion about the reliability of developing a therapeutic strategy based on interfering with fungal zinc homeostasis. 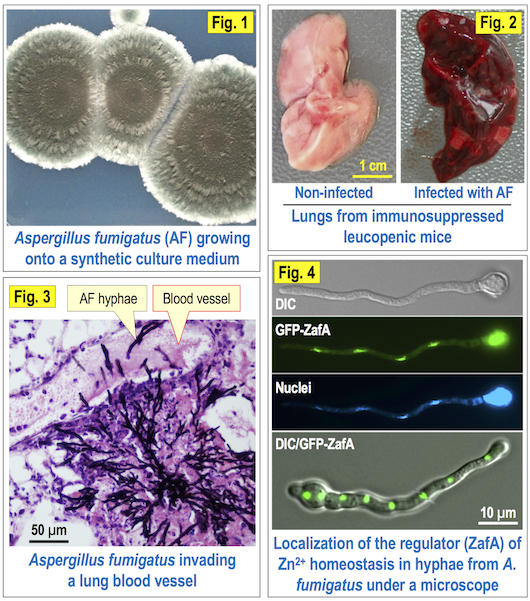