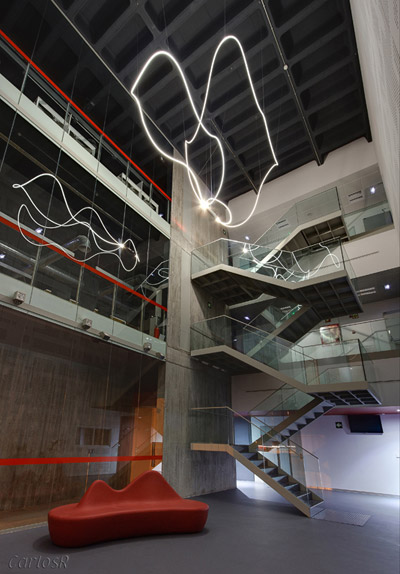 The Institute of Functional Biology and Genomics (IBFG) is a joint research center between the Consejo Superior de Investigaciones Científicas (CSIC) and the University of Salamanca (USAL). The Institute´s main research interest is understanding the molecular mechanisms that regulate cell growth and division, cell morphogenesis, and the replication and expression of the genome.

The IBFG was created in 1970 under the name of the Institute of Microbial Biochemistry (IMB) by Professor Julio R. Villanueva. The IMB was one of the first joint research Institutes between the CSIC and a Spanish University. The IMB was closely linked to the Department of Microbiology of the School of Biology, in the Science building. In 1993, the IMB moved to the Departmental building on the Miguel de Unamuno Campus.

The IMB contributed to research and teaching in Microbiology and in Cell and Molecular Biology, mainly using microorganisms as model systems. The IMB has been a reference Institute in the field of cell morphogenesis in yeasts and fungi and has contributed to the professional training of many University and CSIC Research Professors.

In March 2012, the IMB moved to its current premises in the vicinity of the Neuroscience Institute (INCyL). Dr. Angel Durán (Director of the IMB from 2004 to 2012) was crucial for the construction and the start-up of the new building. With this change in location, the IMB also changed its name to the current Institute of Functional Biology and Genomics (IBFG), with the idea of incorporating a broader range of researchers working in molecular and cell biology and genomics using other model organisms, such as C. elegans and mice, as well as microorganisms.

Researchers at the IBFG have a general interest in studying the molecular mechanisms involved in cell function and its integration in the context of the genome using the most advanced methods available. The Institute has 26 laboratories and a network of core facilities, including administration, a central stock and ordering room, areas for reagents and medium preparation, tissue culture, informatics, radiation safety, and general equipment and infrastructure. About 140 people work at the IBFG, including CSIC researchers, university professors, postdocs, PhD students, undergraduate students, technicians and other professionals running the administration and the maintenance workshop. There are 22 research groups, in three research units (Morphogenesis and Cell Polarity, Genome Dynamics and Epigenetics and Gene Regulation and Cell Differentiation) and one administration and technical unit.

Presentation video of the IBFG

Presentation video of the IBFG "10 years advancing in science". Commemorative video of the ten years since the inauguration of its own headquarters on 16 October, 2012 October, 2022